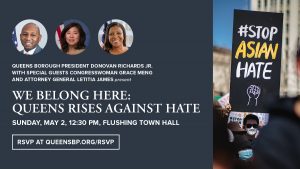 Joined by community leaders and residents from across The World’s Borough, Queens Borough President Donovan Richards Jr., U.S. Rep. Grace Meng and New York State Attorney General Letitia James will proudly present an anti-hate march entitled “We Belong Here: Queens Rises Against Hate” on Sunday, May 2 at 12:30 PM in Flushing, in a show of solidarity with New York City’s Asian American community — a community that nationwide has been the unjust target of a shameful onslaught of racist hate for more than a year, for no other reason than their ethnicity.

Members of the public interested in participating in the march are asked to RSVP at www.queensbp.org/rsvp