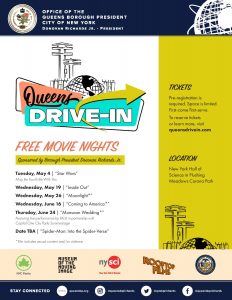 “We’re not out of the woods when it comes to COVID-19 just yet, but that doesn’t mean we can’t safely enjoy evenings in Flushing Meadows Corona Park with our family, friends and neighbors. To that end, it is our honor to bring ‘Free Movie Nights at the Queens Drive-In’ back for a second year,” said Borough President RICHARDS. “From kids flicks to cinematic classics, there is something for every family to enjoy on the big screen this spring.”

Borough President Richards’ series of six free screenings begins with a special showing of “Star Wars” on Tuesday, May 4 — Star Wars Day 2021— also known as “May the Fourth Be With You” to fans worldwide. The first installment of the legendary sci-fi franchise was originally released in 1977 and stars Mark Hamill, Harrison Ford and the late Carrie Fisher as their iconic characters of Luke Skywalker, Han Solo and Princess Leia, respectively.

In addition to “Star Wars,” the full “Free Movie Nights at the Queens Drive-In” series includes a dynamic slate of dramas, comedies and kid-friendly animated films — including an Academy Award winner for Best Picture — for all borough families to enjoy. The series is presented in proud partnership with Rooftop Films, the New York Hall of Science (NYSCI), Museum of the Moving Image, the Queens Night Market, NYC Parks and the New York City Comptroller.

Social distancing will be strictly enforced, and neither guests arriving on foot nor those who have not pre-registered will be admitted. Space is limited with a capacity of approximately 200 vehicles. Pre-registration is required for each screening and opens up two weeks prior to each showing via www.queensdrivein.com. Upon registration, guests will receive a confirmation, which must be presented via printed copy or mobile device upon arrival.

The full “Free Movie Nights at the Queens Drive-In” series is as follows. Dates are subject to change:

The June 24 screening of “Monsoon Wedding” will be hosted in partnership with Capital One City Parks Foundation SummerStage and feature a live musical performance by acclaimed Indian-born, Grammy-nominated singer-songwriter Falu.

Part of a larger, ongoing film festival at the Queens Drive-In, the first three dates of the free film series — featuring a 62-foot screen constructed in the NYSCI parking lot — will open to pre-registered attendees at 7:30PM, one hour before the film screenings begin at 8:30PM. For the showings of “Coming to America” and “Monsoon Wedding,” gates will open at 8PM with the film beginning at 9PM. Exact timing is subject to change, and the film screenings are held rain or shine, except in the event of severe weather.

Food and beverages will be available for contactless purchase through featured vendors that have previously participated in the seasonal Queens Night Market, normally held annually at the NYSCI parking lot in Flushing Meadows Corona Park. Concessions can be purchased via contactless ordering during pre-show programming or via stadium-style vendors walking the premises before the main feature.